OLYMPIA — The website votewashington.info, one of its developers said, was designed with the very modern concept of getting digital information out into a community to better inform people. Using publicly available voter information, the page allows users to, among other things, type names into a search field and learn […]

OLYMPIA — The website votewashington.info, one of its developers said, was designed with the very modern concept of getting digital information out into a community to better inform people.

Using publicly available voter information, the page allows users to, among other things, type names into a search field and learn about a ballot’s status: whether it’s been submitted, if it’s been accepted or if its status is being questioned.

“We wanted to make it easier to get out the vote, we wanted more people to vote and we wanted more votes to be cured of that ballot change status,” said Jake Hartsoch, a 46-year-old software developer who lives in Bellingham.

Hartsoch’s vision met a darker 21st century reality this week, as elections officials worry about interference in the Nov. 3 elections. At the same time, voters are tasked with sorting through endless amounts of online information, some of it dubious or outright disinformation.

On Tuesday, the Washington Secretary of State’s Office warned voters against using the website for official information and said it had relayed the website to the U.S. Department of Homeland Security and cybersecurity experts.

By Thursday, the Secretary of State’s Office and the website had held a meeting and sort of made up — or at least came to terms with each other.

In a news conference Wednesday, Secretary of State Kim Wyman said she and cybersecurity consultants met with Hartsoch and the other developer who designed the site.

The developers agreed to make some changes, including adding a link to the state’s official voter-management site, votewa.gov.

“We were concerned when we first saw the site, because the look and feel is very similar to our site,” said Wyman.

“But when we talked to the two hosts of that site, I really had the feeling that they were trying to help voters be aware that their ballots had been challenged,” she said. “And putting that information in a single spot that was easily searchable … similar to what campaigns do.”

Voters had been calling the Secretary of State’s Office as well as county elections officials concerned about their data being used on the website, said Wyman.

“‘Why is my personal information being shared online? Who is this site? Why did you put this up there?’” said Wyman, adding later: “We were hearing from county auditors and election officials across Washington that this got a very visceral, quick reaction.”

Hartsoch described it as a “great meeting” with Wyman and security consultants about the site, which was developed a few years ago but got very little notice until this election cycle.

“She gave us a full hour of her time,” he said. “She listened, we listened.”

But Hartsoch said he lost a night’s sleep after learning his site was reported to the U.S. Department of Security and that his page has now become harder to share on Facebook.

The issue arose as elections officials here and across the nation brace themselves for potential disinformation campaigns by bad actors as Americans cast ballots in a deeply polarized election season.

The FBI announced last week that Iran and Russia have obtained voter registration information, and that Iran has sent fake and threatening emails to voters in some states.

Wyman has urged Washington residents to report potential intimidation or disinformation by emailing [email protected] or calling 360-902-4180. People should if possible provide screenshots or links to the suspected materials, she said.

Rep. Gael Tarleton, a Democrat from Seattle who is challenging Wyman, a Republican, to be the state’s top elections official, criticized the secretary of state’s response to Hartsoch’s website.

“I think it’s really unfortunate that two engineers built a site for free … designed to be more accessible and user-friendly” than votewa.gov, which was put in place under Wyman’s supervision, Tarleton said.

“Apparently she couldn’t distinguish between the misinformation from foreign governments seeking to undermine our elections, from volunteer efforts of technologists who were using publicly-available information from her own website,” added Tarleton.

Sat Dec 5 , 2020
The Internet Archive has announced that it will begin adding fact checks as well as context to pages in its Wayback Machine in order to explain why they were removed. For those unfamiliar, the nonprofit’s Wayback Machine is a digital archive of the internet and the pages that make it […] 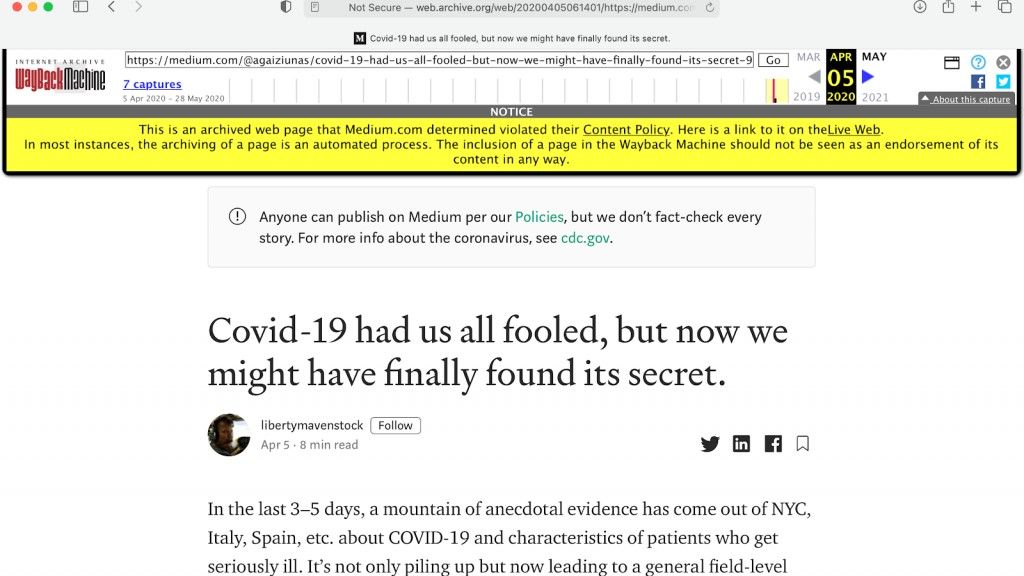